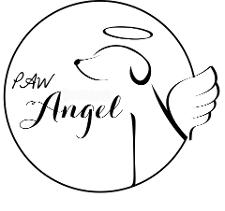 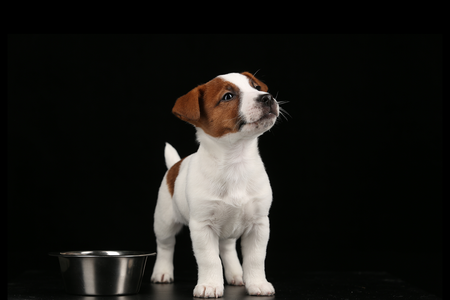 Commercialised unnatural dog foods can cause health problems in dogs especially as the dog ages. Feeding your dog raw foods the natural way as nature intended combats these problems. The natural prepared herbal supplements that Paw Angel supply are a very important addition to the dogs diet. The domesticated dog cannot seek them for themselves as like the dog in the wild.

All our products have been specifically formulated to give your dog the vital vitamins, minerals, trace elements and antioxidants they require for true and complete health the natural way.

From 8 weeks up till 6 Months based on a Cocker Spaniel size breed, feed more or less according to thesize and breed

Repeat 12noon meal without the supplements.

Repeat 8am milk meal and ryvita 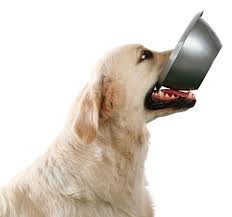 Based on average size dog (COCKER SPANIEL), give more or less according to size.

Never give cooked bones as they may splinter and are dangerous.

Always have fresh drinking water available Only leave food down for 20 minutes, pick up and feed at next meal time to prevents fussy eaters

Dogs were in existence long before the creation of dried dog food. So how could they have possibly survived. In the wild a dog will catch it's food and devour nearly all of it, the flesh (good source of protein), fat (a good source of energy), bone (good source of calcium), muscle and organ meats, and the stomach with its contents (a good source of enzymes, minerals and pre-digested plant material consisting of herbs and grasses).

Dogs, both domesticated and wild, are members of the carnivore family. Anatomically, they are built for it. No one describes this more eloquently than Juliette de Bairacli Levy in her book, The Complete Herbal Book for the Dog A Handbook of Natural Care and Rearing:

The dog is a meat eater, from the teeth fashioned for tearing and crushing, the powerful jawbones and muscles, the small, very muscular stomach, the short intestines and above all the very powerful digestive juices peculiar to the carnivorous animals - digestive juices that can dissolve even lumps of bone. In health, the dog's juices, both of mouth and stomach, are strongly antiseptic, and thus high meat and even flesh from diseased animals  food which would kill a human being in a day,  can be eaten without any harmful effects.

Ms. Levy's philosophy of raising dogs is called Natural Rearing and it means just what it says raising the dog in such a way as to reproduce the way they would exist in their natural state.

Natural rearing diets, such as Raw Food, also known as, Bones And Raw Food), are based on fresh foods such as raw meats, raw bones, raw vegetables and herbs. Because dogs in the wild would not eat every day, one day of fasting (only for adult dogs) per week is also recommended. This allows the animal to cleanse its body of toxins.

Cooking breaks down many of the proteins and amino acids in raw meat, thus destroying much of it's nutritional value. The dog being not only a hunter, but a scavenger as well, will be able to exist on a diet of cooked food, but it will not be in optimal health. I guess a similar comparison would be to place a human being on a strict diet of only MacDonalds hamburgers and fries for the rest of his/her life!

Raising your dog on poor diets will eventually have its effect - disease, immune deficiencies, short life span, the list is endless. Thanks to the works of Juliette de Bairacli Levy, Dr. Ian Billinghurst, Wendy Volhard and Dr. Kerry Brown, Dr. Tom Lonsdale and Kymythy Schultz a step in the right direction (back to nature) has been taken. Their books have been and invaluable source of information for all dog owners.

I am sure you are thinking, "...what is Green Tripe?". The answer to that is simple, because it is the best, most natural food you could feed your  dog. It has been a well known secret of top breeders/kennels of performance dogs for years. The following excerpt from Juliette de Bairacli Levy's book, The Complete Herbal Book for the Dog, says it best.

"I would suggest breeders make good use of such flesh foods as the following paunches of all animals (the raw, uncleaned paunches of healthy grass-fed animals can be fed with much benefit to all breeds of dogs). I learned this from a gypsy in the Forest of Dean: this man had bred many famous greyhounds, and he told me that such fare was the finest of natural food tonics.

Tripe is the stomach of  animals. These animals i.e. cattle, buffalo, sheep, deer, goats, antelope, etc.) are classified as being four-footed, hooved, cud chewing mammals. The food the animal eats i.e. grass and hay is swallowed unchewed and passes into the rumen and reticulum where it is then regurgitated, chewed and mixed with saliva. It is again swallowed and then passed through the reticulum and omasum into the abomasum, where it is then further broken down by the gastric juices, amino acids and other digestive enzymes.

So how can something so disgusting, be so good. These same gastric juices and enzymes not only aid the animal in digestion, but also aid the dog in digesting and efficiently utilizing his food. The amino acids are necessary for muscular development and, the other gastric juices, I believe, are the best cleaner ever for their teeth.

Finally, because of the rubbery texture of tripe, serving it in large chunks also aids the canine in strengthening it’s jaw muscles and has an added benefit as a form of canine dental floss. 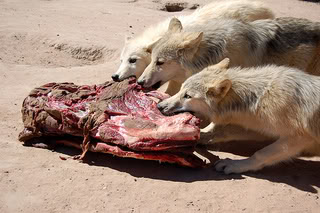 Consider the wolf, a dog’s closest relative. Wolves are hunters and scavengers, relying primarily on animal protein. They are not, however, accomplished chefs. Check out a wolf’s den. No pots, no pans, no range stove. Not even a salt shaker. They were on the raw diet before commercial dog food was invented. You won’t see wolves feasting on Purina; they eat raw meat, and lots of it.

Genetically, dogs are virtually still wolves. They weren’t even domesticated until 15,000 years ago. So, for some 5,000 years the furry guys were tagging along with hunter-gatherers, munching on the leftovers: meaty bones, organ meat. They were scavengers like their wolf ancestors and they flourished as our companions. Sure eating our leftovers may not have been the optimum dog diet, but it was certainly better than the dry, over-processed sawdust containing hidden toxic substances that passes for dog food today. Modern dogs today are pampered and we as dog lovers want to give them the best possible food for optimal health. Commercial bought dried dog food can work for them as a young dog, but as they age the dog starts to show nutritional problems.  A dog fed naturally as nature intended would lead a longer healthier life. All this because we have been brain washed by all the advertising of commercial dog food being the best for our dog, this is so terribly wrong. Take a step back and take a long look at your dog and please realise what is best for them. 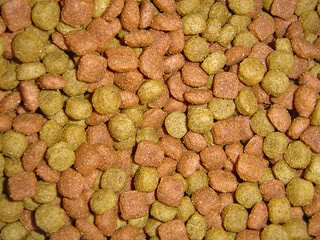 Does commercial dog food really work, Well certainly it keeps them fat and alive. check out the ingredients on the package, the results will shock you. You’ll see stuff like lamb meal, ground rice, wheat, corn, sorghum and that’s for the premium brands, not forgetting all the hidden toxic substances contained in this food. Why would you feed a carnivore grains, Somehow we doubt that wolves were out there shucking corn and harvesting rice. And just what is lamb meal? From Wikipedia, it is the dry rendered part from animal tissues, prepared for feeding purposes by tanking under live steam or dry rendering. After all that processing, what little remaining nutritional value of the meat is left, it cannot possibly counterbalance the filler ingredients. The dog gets full, and even happy, we all know that dogs will eat anything, but the nutritional deficit adds up. You can stick with commercial dog food, but prepared for when the dog ages. Look at what wolves eat any meat they can get their paws on and go from there. The truth is following a Natural Diet is the best way to ensure happy, healthy dogs. Best of all, it is so easy. 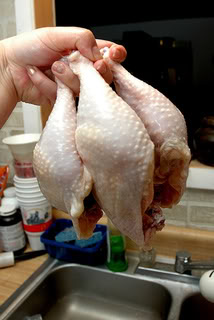 A Natural eating plan for dogs should consist mainly of organ meat, raw meaty bones (like chicken carcasses or turkey necks), and muscle meat, naturally and humanely-raised. Really, any animal product is acceptable. Wolves ate a wide range of animals. Some pretty affordable options include:

Dogs don’t need fillet steak to lead a healthy life. The first things wolves go for are the organs of a fresh kill. They prefer the cheaper, fattier, more nutrient meats.

Going from traditional dog food to raw feed can be a little unnerving. Try to resist the impulse to do a half traditional/half raw transition. This will only confuse the dog’s digestive system and lead to diarrhea. Remember you’re not switching commercial dog food, you’re replacing Poison with real food. Mix the meal with   Paw Angel  Daily Health Remedy

Puppies are blank slates and will take to the diet immediately, but older dogs may need a couple days to get used to the new food. Prepare to detox if your dog’s been on commercial dog food for awhile.

Stick to fairly basic foods at first, like turkey and chicken necks. Dogs love to gnaw and chew bones, so this will come natural to them. If your dog’s a gulper and most reformed commercial eaters are, hold the bones for them while they eat to promote proper chewing they soon figure out how to chew. 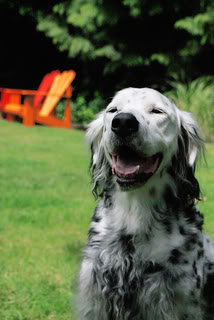 To truly see the benefits, you have to try the diet out for yourself. Results tell the tale, but some common benefits include:

Shiny soft coat The Natural eating dog will imbue with a beautiful luster. Heads will turn at the dog park; Fish oil supplementation makes this even more noticeable.

A healthy, long living best friend Your dog will live a healthier, fuller life on a Natural Diet.

Don’t dogs choke on bones?
Not on raw ones. Cooked bones splinter, and they can get lodged in a dog’s throat. Raw bones are pliable, and the calcium content is absolutely vital to a dog’s health. Plus, chewing bones keeps the teeth clean. No more dental bills.

What about food borne bacteria? Isn’t raw meat dangerous?
Wolves seem to do just fine eating days old carrion. Dogs’ stomachs are equipped to handle bacteria in much the same fashion, so don’t worry about contamination.

How much should I feed?
Let’s use a sixty-pound Retriever assuming it gets plenty of exercise, feeding about a pound and a half to two pounds of assorted meats and bones is plenty. Everything varies from dog to dog, of course. If you can’t feel its ribs, reduce the food. If its ribs are a little too prominent, feed more.

Just meat?
Vegetables can be added to your dog’s diet. In fact it is recommended. Carrots are fun to crunch, and broccoli, spinach, celery and root vegetables  can be ground up and added to a mixture of meat. Supplementing with fish oil is also recommended for a shiny, healthy coat.